DA Councillor for Ward 79 Tshwane, Vickey Bosch, was approached by a resident of one of the complexes overlooking the veld on the corner of Piering Road and Demas Road advising her of illegal dumping. People who illegally dump their building and other rubble, drive in behind the trees where they could not be seen from the road.

There are 3 townhouse complexes next to each other, overlooking this illegal dumpsite. When it is windy, papers and plastic bags are blown onto their properties from the dump. As the illegal dump is getting bigger, squatters are starting to move into the area, lighting fires at night which in itself is dangerous because of the long dry grass and trees.

At night the residents cannot sleep with open windows, due to the smell of the grass and wet tree stump fire smoke filling their houses. The residents are also experiencing increased burglaries which are being reported to the Metro and Bull Security. On Sunday afternoons, cyclists could no longer ride in the veld, as there were too many drunken people gathered there. There was also a problem with rats and other vermin who live in the dumps.

Please do NOT dump illegally in this veld – make use of the following dumping sites in Tshwane: 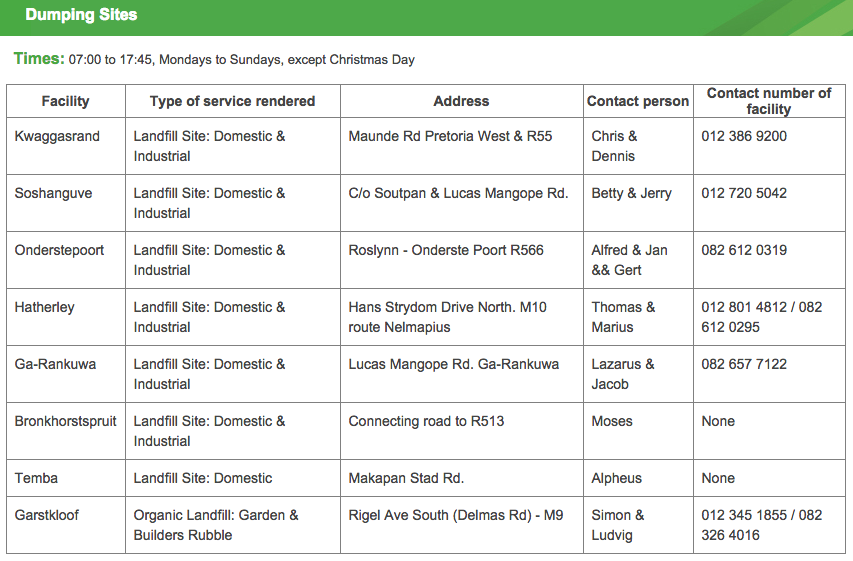