3 November 2016 – He is still on the ventilator and they keeping him sedated and controlling his pain. They looking after his lung as well and when he came out of theater they did another X-ray. He received blood today. Both his hands are open now and his face. From what I’ve seen on other burn survivors his hands and face looks nice.

31 October 2016 – Sean is now in burns ICU in Milpark. Sean’s left lung collapsed. The doctor explained that he is going to put a tight masks on for him to help bring up the lung and he will monitor him for the next 4 hours. Should that not be working to his satisfaction he would have to put him back on the ventilator. He will be going to theater after 14h00.

22 October 2016 – His vitals are currently a bit worrying. He has an increased pulse rate of 132 beats per minute and a temperature of 38.5 degrees. These could be indications of an infection. His blood pressure, respiration and saturation levels are stable. They will take him theater on Monday. 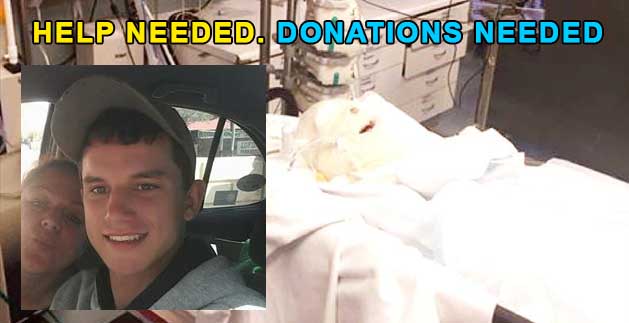 Sixteen-year-old Sean Smith suffered serious burns on 17 October 2016 when his shirt caught fire while helping another woman with her car which was leaking oil. He used petrol to clean the oil off his hands and someone nearby lit a cigarette and Sean caught fire.  He sustained third degree burns to part of his face and upper body.

Sean was taken to the nearest hospital UNITAS (private) but unfortunately he does not have medical aid and cannot afford the costs of a private hospital. Sean was moved to Ga-Rankuwa hospital on Friday, 21 October 2016.

Everyday the teenage burn victim spends at the Ga-Rankuwa hospital, his mother is fearful he might contract an infection that will endanger his life. The move to Milpark hospital requires R3 million.

This is a fund raiser to get Sean moved to Milpark private hospital in Johannesburg, which specialise in burn victims.

Please help us by sharing this message with your friends and family.